So my old lady canning efforts continued  this past weekend.  I made tomato jelly for the second year.  I was so excited for my garden to finally put out enough tomatoes at once to make this possible.   This stuff is SO GOOD!   Since Saturday, the tomatoes continue to ripen at a crazy pace.  So it looks like my next canning adventure may not be long off!

This year I made a small modification to the recipe, because I forgot to buy a lemon to zest. Ha!  So orange zest it was!  And it turned out to be a wonderful change.

Yields:  About 6 half pint jars

To prepare tomatoes:  Wash ripe tomatoes.  Scald, peel, and chop tomatoes.  Place chopped tomatoes in a saucepan and heat slowly to simmering, stirring constantly to prevent sticking and burning.  Cover and simmer for 10 minutes, stirring occassionaly.  Take cooked tomatoes and place in a blender.  Pulse until no chunks remain.  Measure 3 cups of the cooked tomatoes into a large saucepan.  Add orange rind, allspice, cinnamon, and cloves.

To make jelly:  Sterilize canning jars.  Add lemon juice to the prepared tomatoes in the saucepan.  Measure sugar and set aside.  Stir powdered pectin into tomatoes.  Bring to a boil over high heat, stirring constantly.  At once, stir in sugar.  Stir and bring to a full rolling boil that can’t be stirred down.  Then boil hard for 1 minute, stirring constantly.

Remove from heat.  Skim off foam.  Pour hot jelly into hot jars, leaving 1/4 inch head space.  Place the lids on tightly.  Process in a Boiling Water Canner (ie. big pot that allows water to be filled above the jars).  5 minutes.

My jars sealed in about 30 minutes.  And the jelly tasted delicious.  Let me know how yours comes out! 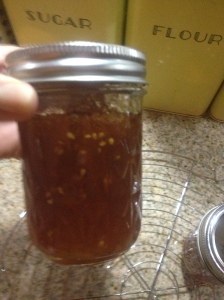 Stay positive and love your life!

Listening to:  Them Crooked Vultures – No One Loves Me & Neither Do I

Matt and I have been laughing at the fact that my hobbies and interests range from young, fun, hip and sometimes tom-boyish (ie. my love of beer, rock concerts, sports, the outdoors, fitness) to old lady (gardening, baking,canning….I know how to crochet, etc.)  And this weekend I added another notch in my old lady belt;  I made pickles!  To make it even more home-ecish, I made them from cucumbers that came from our garden.  And I can’t even describe how damned excited I am about all of this!  I’m really not sure how I’m going to wait the suggested 3 weeks to sample our wares.  I’m probably going to look at those pickle jars every single day just to see if I can visually surmise how truly amazing they will be!

I suppose I  should wait until we try them to provide you with the recipe, but hey, I have pickles on the brain today.  So that’s what I’m going to write about!

black peppercorns (roughly 36 of them)

Slice ends off cucumbers then slice in 1/4 inch rounds.  Put the slices in a large pot and cover with 2.5 quarts of water.  Add 3 tablespoons of salt and stir until the salt is dissolved.  Cover and let stand for about 12 hours.

Prepare the jars by filling the jars and a large pot with water.  Bring to a boil.  Cover and reduce heat to low to keep the jars hot.

Into each of the 6 pint jars, add 1 teaspoon of dill seeds, 1 teaspoon minced garlic, 1/2 teaspoon of mustard seeds, 1 bay leaf, 1-1.5 sprigs of fresh dill, 1 garlic clove, and  3-6 peppercorns.  We also added a dried chili to two jars for a spicier version! 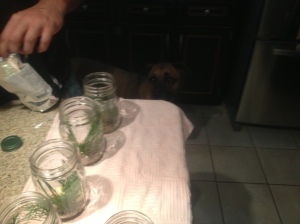 Notice Jovi in the background.  She supervised the entire process and was unhappy to report that no cucumbers hit the ground.

Add hot vinegar mix to each jar leaving 1/2 inches of space at the top.

Seal and place back in a large pot of water.  Water should just cover the tops of the jars.  Bring to a boil and boil gently for 10 minutes.

Someone please buy me a canning pot for Christmas.

Carefully remove jars and set aside to cool. 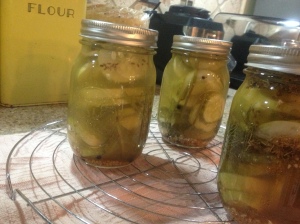 They appear to be delicious…time will tell.

I will let you guys know how they taste in a few weeks!  Do you have a great pickle recipe?  Share below!

Random fact:  I love garlic.  A lot.  If I were in culinary school I would be chastised for overwhelming my food with garlic.

Last spring I started the project of turning my weed infested side yard into a small vegetable garden.  Most of my yard is shady owing to the fact that I have a million trees.  This is the only area of my yard that receives full sun and is not spoken for by a tree, a bush, or some other landscape effort.  I wanted to take what was my least favorite portion of my yard and turn it into a place I actually want to visit.  Enter lots of hard work:

We started by ripping up the insane amount of weeds and growth that had taken over the area.  What a mess!

Then the ground needed to be leveled and cultivated.  For this, I ended up renting a tiller or as Bee called it a “ground chopping tool”.

Here is the most macho picture Bee has taken in his entire life.  Look at him just chopping that ground!

We then bought three kits to build raised beds and ten big bags of soil.  After a lot of work, sweat, and Bee squealing about bugs getting on him, we had this:

A short while later I had my first harvest:

It looks pretty meager, but I was very excited!

By the end of the season, that little garden had produced an insane amount of veggies.  I ate so much squash I was sick of it.  I canned some delicious Tomato Jelly (sounds odd if you’ve never tried it, but it’s amazingly yummy) and some tomatoes, peppers, and onions for sauce use later.  I gave away more peppers than I could count.  The experience was so rewarding that I couldn’t wait to plant this year’s garden.

Lessons I learned to carry over to suburban garden 2.0:

This year planting took all of an hour.  Matt joined me for the task this year and was relived to not have to till anything.  We weeded, added some additional soil, and put down a bit of fertilizer.

We’ve had a ton of rain over the last two months and the garden is loving life.  I swear that the squash and cucumbers grow 6 inches+ post shower.  They’re like mutants!  Here’s our first harvest (aside from the lettuce we’ve been enjoying for months): 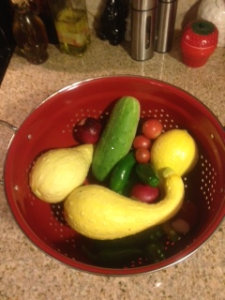 These squash were two inches long two days before this picture.

When the tomatoes start to ripen, we’re going to have to be ready to act quickly!  There must be no less than 100 green tomatoes out there just bidding their time.  Salsa, marinara, and jelly are planned.  We’re also going to be pickling some cucumbers…our first attempt at this.  If anyone has a great pickle recipe, send it my way!

Matty better be glad I think he’s the best thing since sliced bread, because I’m totally eligible to sign-up for for farmersonly.com now! 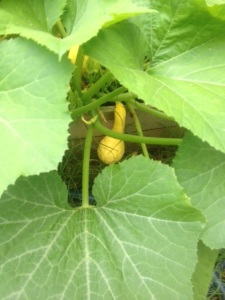 I will post recipes as we continue to harvest, cook, and can!  All you gardeners out there, please feel free to share your secrets!

Listening to:  The Smashing Pumpkins – Here Is No Why

Random fact:  I always wanted braces as a kid even though I had no need for them.

Melissa is a 30-something who lives in Atlanta. She loves her dog and beer way too much and would rather go to a concert than go shopping.

Things That Have Made Their Way Into a Post

Stuff I Write About

What I’ve Been Reading

Some Other Awesome Blogs

Pay attention. Be astonished. Tell about it.

Thought Catalog is a digital youth culture magazine dedicated to your stories and ideas.

Must Be This Tall To Ride

I'm a single dad documenting his journey. A guy trying to walk a higher path. And messing up. A lot.

Crazy is relative. Just ask my relatives. And music!